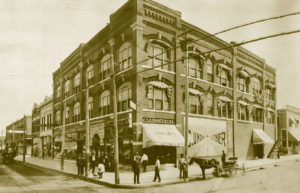 Established in 1906, prior to statehood, Southern Abstract Company is a full-service title company offering abstracting/land record research, escrow closings and title insurance. The company was started by four gentlemen. We have copies of minutes from a September 9, 1907 board of directors meeting; in it they voted to retain one gentleman as their Office Manager “until such a time as a competent man can be secured to take his place”. Frank Phillips was one of the early stockholders. The Dunaway family purchased the company in 1948. In 1955, F. Earl Harper and his family moved from Buffalo, Oklahoma to Bartlesville when he was hired to manage Musselman Abstract Company. In 1957, he purchased Southern Abstract Company from the Dunaway family.

More About Our Team

Owen L. Harper is the current Owner and President. He began work as a janitor for Southern Abstract when he was 12 and worked on and off through high school. When he returned in August 1971 after serving in the Vietnam War, he went to work full time and has been there since. He worked with both his father, Earl, and his mother, Vera, until their retirement (both are now deceased). He now works with his wife, Catherine Blakley, Senior Vice President and COO.

Southern Abstract is a member of the American Land Title Association (ALTA) and Oklahoma Land Title Association (OLTA). Earl served on the ALTA Board of Governors and was one of the founders of TIAC, the Title Industry Assurance Company, which provides E&O insurance to many title companies throughout the country. Earl, Owen and Catherine have been very involved in the OLTA. Prior to his retirement, Earl missed only one OLTA convention when he was serving in the Korean War. Each served on many committees and all served in numerous offices on the Board including President (Earl in 1970-1971, Owen in 1984-1985 and Catherine in 2007-2008). All three have been awarded the highest honor of the OLTA, the Bill Gill Title Person of the Year (Earl in 1992, Owen in 2006 and Catherine in 2010). Owen was on the OLTA Board when both the original abstractors law and the original title insurance law came in to being. Owen and Catherine both helped write and lobby the latest abstractors law (Title 1 of the Oklahoma Statutes) which created the Oklahoma Abstractors Board, and continue to be involved in legislation affecting businesses and real estate transactions in Oklahoma.

Southern Abstract Company has always been technologically progressive. Earl, who was an incredible typist, was one of the first companies to get an IBM Selectric Typewriter, which had memory capabilities. In the early 1960s, Southern Abstract Company and 9 other Oklahoma abstract companies funded research into the feasibility of computers in the title industry in Oklahoma. That project resulted in the first computerized abstract company in Oklahoma. Southern Abstract has continued to be progressive with technology, and internal operations at the company have been paperless since 2011. Our abstract plant (land title records) is current with the County Clerk and Court Clerk of Washington County. Everything filed by the end of the day in the county offices is indexed and ready to search the next morning.

More About Our Services